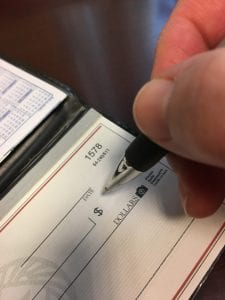 If you are like many Georgia taxpayers, you are being solicited by Student Scholarship Organizations (SSOs) and Rural Hospital Organizations (RHOs) to pledge now for contributions to be made for the 2019 tax year. Contributions to the organizations have been an effective tax strategy for many years, enabling taxpayers to get federal tax deductions for the charitable contributions as well as state tax credits. However, changes to the federal tax laws late last year and new proposed limits to federal charitable deductions for contributions that qualify for state tax credits may affect the tax benefits. A taxpayer considering pledges to an SSO or RHO needs to take this uncertainty into consideration before deciding if such contributions are right for you.

By contributing to an SSO, a taxpayer effectively redirects Georgia income tax payments to a school of his/her choice. A married couple could get a federal charitable deduction as well as a dollar-for-dollar credit on their Georgia tax return if they made a contribution of up to $2,500 to an SSO such as ALEF Fund or Georgia Student Scholarship Organization (GASSO). The contribution limit could be higher for owners of pass-through entities (S Corporations, LLCs, etc.) and for C Corporations. The maximum Georgia set-aside for the program in 2018 was $58 million, which was met in January, but the maximum for 2019 will be $100 million.

To help struggling rural hospitals in Georgia, the Georgia Rural Hospital Credit was created to allow taxpayers to redirect Georgia income tax payments to RHOs while affording a federal charitable deduction. After the credit was enhanced and increased to a dollar-for-dollar plan in 2018, the interest in the program intensified and the maximum $60 million set-aside by Georgia for the program was met in July. Another $60 million is earmarked by Georgia for 2019.

The Tax Cut and Jobs Act passed in December 2017 limits the tax deduction for state income taxes (in addition to certain real estate taxes) to $10,000 beginning in 2018 for individuals. The new limit made the SSO and RHO programs more valuable since charitable deductions under the programs could effectively replace nondeductible state income taxes. Other states such as New York and California recognized this value and created similar programs in 2018 to benefit their residents.

The proposed regulations do not impact the amount of the credit taxpayers will receive on Georgia tax returns. If taxpayers pledge and contribute to an SSO or RHO in 2019, they will get a dollar-for-dollar credit and therefore not “lose” any money (assuming they have enough Georgia tax liability for the credit to offset). What is different now is that taxpayers may not get the additional charitable deduction under the proposed regulations.

There are some advisors who believe the final regulations, when issued, might differentiate programs previously in place like Georgia’s SSO and RHO programs from the newer ones established after the 2017 Tax Act. We hope to get final regulations in the next month or two. Until then, we believe taxpayers should assume they will not get a charitable contribution deduction.

There is some administrative burden in participating in these programs, so keep that in mind when deciding. The SSOs have made that program fairly easy but the RHO program requires more steps. If you have a specific school or rural hospital that you want to benefit, we encourage you to pledge and contribute given the dollar-for-dollar credit.

If you are wondering if contributing to an SSO or RHO would provide you with tax benefits, please contact one of WBL’s tax experts.

DO MORe NOW: Five Reasons Why Time is of the Essence to Implement ASC 606