The Quiet Tax-Saving Opportunity That Packs a Powerful Punch 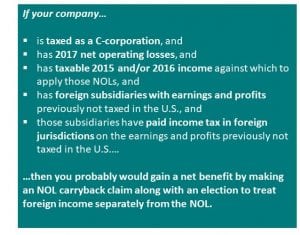 Most owners and executives of U.S. companies with foreign subsidiaries know about the new deemed repatriation rules, which require them to include previously untaxed foreign profits on their 2017 U.S. tax return.

But many people don't know about a unique tax-saving opportunity, which lies at the intersection of three recent law changes: (1) the changing IRS rules on carryback of net operating losses (NOLs), (2) a new election that allows C-corporations to treat foreign income separately from U.S. operating losses, and (3) the change in the corporate tax rates.

Here's how it works:

Our first step is to determine whether we should carry back those NOLs to the two prior years, or if it makes sense to forego that option and instead carry them forward to one or more future tax years. Note that the new tax law did away with NOL carrybacks, so 2017 is the last year to take advantage of making an NOL carryback claim. Since this corporation had plenty of income in 2015 and 2016, which was taxed at a 34% rate, we will carry back those NOLs.

Tip: NOL carrybacks will be the better option for most corporations given the new, lower corporate income tax rate of 21%.

While carrying back NOLs is not new, the deemed repatriation rules make this situation more interesting. The Tax Cuts & Jobs Act (TCJA) requires all previously untaxed foreign profits to be included on 2017 tax returns as "Subpart F income." For most businesses, these profits will be taxed at 15.5% for cash, accounts receivable and other cash-related accounts on the foreign subsidiaries' balance sheets and 8% on all other earnings and profits being repatriated under Code Section 965.

However, what the TCJA takes away with one hand, it gives back with the other. The new Code Section 965 allows U.S. corporations to elect to treat foreign income separately from U.S. net operating losses. By making this election on its 2017 tax return, USParent Inc. separately reports its foreign earnings of $1.1 million, keeping its full $1.7 million NOL intact and available to be carried forward or carried back.

USParent Inc. expects to receive a $578,000 refund on its 2017 U.S. NOL carryback claim as compared with what would be a $204,000 refund without making the election. These savings of $374,000 were made possible by a thorough understanding of the new Code Section 965, as well as taking advantage of our old standby, the NOL carryback rules.

If your company has not yet filed its 2017 tax return, ask your CPA if this election is available to you. At the very least, you will likely want to carry back any NOLs to the maximum extent possible and take advantage of offsetting losses against income taxed at higher corporate rates. If you have any questions or want to discuss further, please contact me by email or phone (770-512-0500).